A big year for accomplishments and accolades

Before we dive into the upcoming activities, we would like to look back at a stellar 2016 filled with wonderful wines, new friends, and many notable accomplishments.

The year started off with a bang when the 2012 Winery Hill Pinot Noir was named #1 Pinot Noir in the World at the Decanter World Wine Awards, taking Platinum - Best in Show honors.

Oregon winemakers added a new admirer when James Suckling, proprietor of jamessuckling.com and former Senior Editor of the Wine Spectator, made his inaugural visit to the region.  James liked what he found, and awarded the 2012 Monogram Pinot Noir 98 points, matching the highest rating ever given to an Oregon Pinot Noir by a major publication.  Mr. Suckling went on to name 20 of Domaine Serene’s wines at, or above, 92 points and placed the 2012 Monogram at #46 in his Top 100. 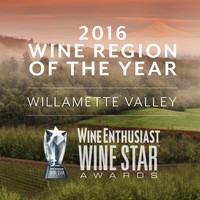 Our winegrowing region, the Willamette Valley, was also recognized by the Wine Enthusiast with a Wine Star Award naming it the Wine Region of the Year.  Additionally, the 2013 Evenstad Reserve Chardonnay was named #31 in their Enthusiast 100 of 2016.

Finally, to top off an already stellar year, the 2014 Evenstad Reserve Chardonnay was declared the #1 White Wine in the World by Wine Spectator in their 2016 Top 100.  This accolade is extremely special, as it marks the first time a producer has been recognized by the Wine Spectator as a Top Three Wine of the World for both Chardonnay and Pinot Noir.

2016 was a very special year in which Oregon was front and center on the world’s stage.  In total, Domaine Serene was placed on four Top 100 lists.  Each of these exemplary distinctions reinforce our commitment to excellence and demonstrate the sheer breadth of quality in our entire winemaking program.

Domaine Serene is truly changing the landscape of fine wine.