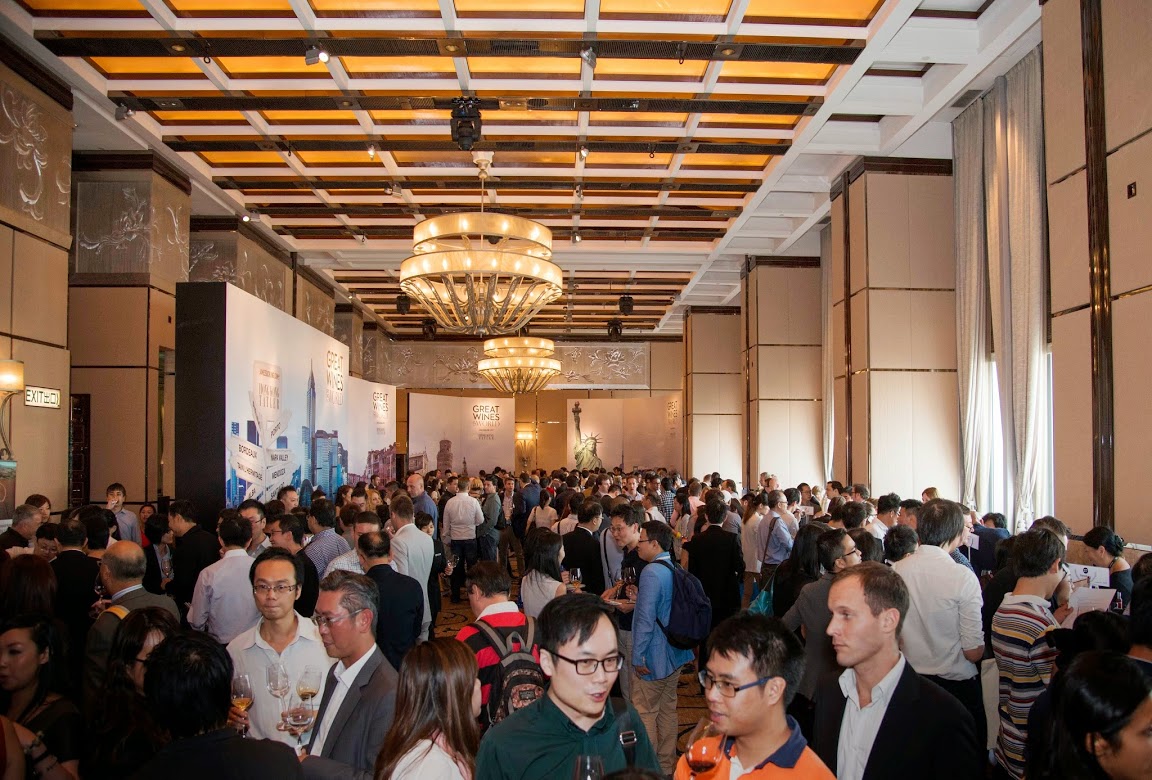 More than 1,000 wine lovers attended the first Great Wines of the World event on October 31 and November 1 at the chic Four Seasons Hotel for two large wine tastings and an exclusive wine dinner at the private China Club. Moreover, another 15,000 people attended the Great Wines of the World stand during the Wine & Dine Festival in Kowloon at the former Kai Tak airport from October 30 to November 2. Overall, more than 100,000 people attend the four-day Wine & Dine Festival, making it the biggest consumer wine event in the world.

All the wineries were personally selected by internationally acclaimed wine critic James Suckling, who is wine editor of Hong Kong Tatler as well as editor/CEO of JamesSuckling.com. He is the only major wine critic living full-time in Asia with more than three decades of reviewing wines. Only wines receiving 90 points or more from Suckling were served at the tastings and dinner. Airline Cathay Pacific sponsored the event and transported all the samples from four different continents under its new wine shipping program called WineLift (click here for information).

American Paul Hobbs, part owner and winemaker of Argentina's Viña Cobos, received an engraved Lalique 100-points decanter for his wine being selected as Suckling's Wine of the Year in 2014 – the 100-points rated Viña Cobos Malbec Pedriel Luján de Cuyo Cobos 2011. "It's not only an honor for me to receive this award but it's an honor for Argentina," Hobbs said to the 150 people attending the exclusive wine dinner, including Peter Lam, the chairman of the Hong Kong Tourism Board. "Our 2011 Cobos is the first Argentine wine to ever receive 100 points from a major wine critic and it's a triumph for us and for Argentina."

Click here for a story on the Top 100 Wines of 2014. Suckling and contributing editor of JamesSuckling.com, Nick Stock, tasted about 10,000 wines in the last 12 months and carefully selected the list of 100 wines.

Many of the wines were on pour during almost six hours of tasting at the Four Seasons, not to mention the amazing cheeses from the Caprice restaurant. The first tasting session in one of the ballrooms of the hotel was primarily for wine trade including merchants, restaurants and others. The second session was filled with chic Hong Kong Tatler and JamesSuckling.com readers. Tatler has almost 200,000 readers in Hong Kong while this website is the most popular online wine website in the city, according to Alexa, a California-based subsidiary company of Amazon.com that measures website traffic.

"The people who attended the tasting were really top notch," said Herve Berland, the head of the prestigious Bordeaux château, Montrose.

A one-hour tasting seminar on "What Makes a Great Wine" was held a couple of hours before the Grand Tastings with Suckling and Stock moderating vintners Sebastian Papin of Billecart Salmon, Emma Cullen of Cullen Wines, Johann Pichler of FX Pichler, Pio Boffa of Pio Cesare, Dirk van der Niepoort of Niepoort and Philippe Dhalluin of Mouton Rothschild.

The sold-out dinner at the China Club was equally praised with an eight-course Chinese dinner and dozens of different wines from the participating wineries. A number of special bottles were also shared at the Collector's Dinner by participants, including such rarities as 1969 Leroy Musigny and 1999 Armand Rousseau Chambertin in magnum. The vintage Ports served to everyone were equally impressive, including 1962 Niepoort Porto Colheita, 1994 Taylor, 2003 Quinta do Noval, and 2007 Dow. The Dow and Taylor are 100-point wines.

Grammy Award-winning musician Rob Moose flew in from New York City for the event and amazed the crowd with a violin tribute to the Beatles playing an arrangement of "Yesterday" with an influence of Johann Sebastian Bach. He followed up with some improvisations after tasting a glass of 2008 Bruno Giacosa Barolo Rocche del Falletto Red Label Riserva from magnum, and later in the evening the 2007 Dow. He, like many others at the event, finished the evening tasting until the early morning and later drinking Champagne on the rooftop terrace overlooking the lights of what Suckling called earlier during the event "clearly the greatest wine city on earth today."