In a preview just in from the Wine Enthusiast magazine, eleven Domaine Serene Pinot Noirs and Chardonnays reviewed by the publication were awarded 92 points or higher!

All wines reviewed were recent releases from the Willamette Valley 2013 red-wine vintage or 2014 white-wine vintage.

Winery founders Grace and Ken Evenstad along with the Domaine Serene winemaking team found the 2013 Pinot Noir scores to be especially gratifying. Following idyllic summer conditions leading up to harvest, heavy September rains presented a serious challenge for many Willamette Valley wine growers. Domaine Serene winemaker Erik Kramer prudently chose to begin harvest well ahead of the rains. This decision, along with the overall impeccable fruit quality coming from our estate vineyards, combined to make 2013 yet another in a string of great Pinot Noir vintages for the winery. The upcoming Wine Enthusiast scores for six Domaine Serene 2013 Pinot Noirs include “Editors’ Choice” recognition for the 2013 Yamhill Cuvée Pinot Noir, and a “Cellar Selection” accolade for the 2013 Winery Hill Vineyard Pinot Noir.

Not to be outdone by their red counterparts, Domaine Serene’s 2014 whites also received high praise. Four Domaine Serene Chardonnays received scores of 92 points or higher, including a “Cellar Selection” for the 2014 Clos du Soleil Vineyard Chardonnay. A fifth white wine—the unique, limited edition Coeur Blanc Pinot Noir—garnered 94 points and an “Editors' Choice” in its first-ever review by the magazine. An offering from Domaine Serene’s Prestige Selection, Coeur Blanc is an extremely rare white wine made from 100% Pinot Noir grapes, all estate-grown. The 2014 vintage of this wine is a must-have for discriminating collectors.

Full tasting notes of these fabulous ratings will be publicized by the Wine Enthusiast in their December 2016 issue. Until then, the following summary provides a special insider’s preview of all eleven great scores, compliments of the magazine. 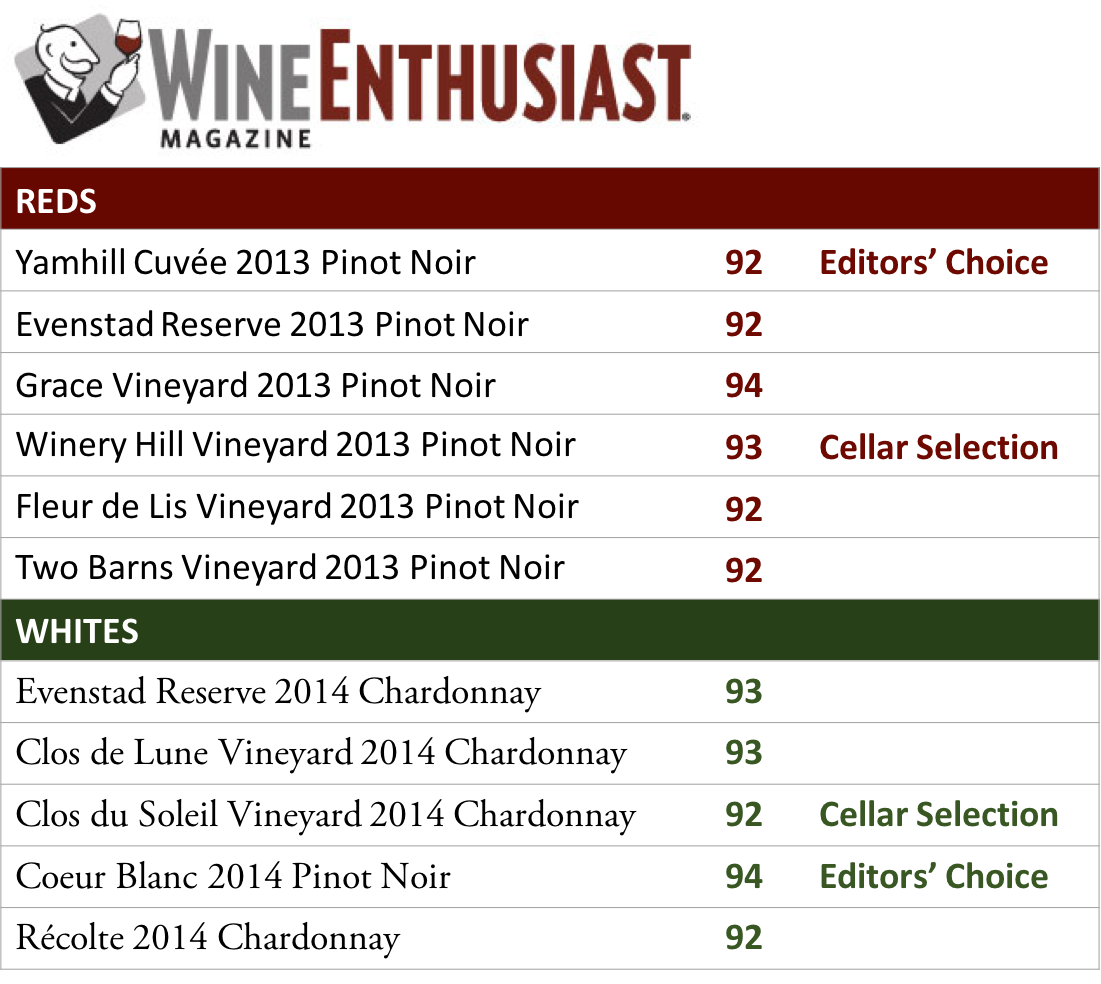