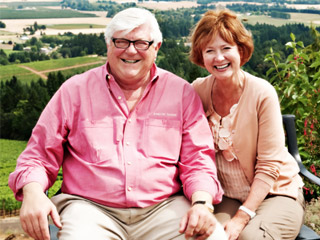 One impenetrably foggy Oregon afternoon in December 1989, a real estate broker took Grace and Ken Evenstad to view a 42-acre estate they were hoping to buy in the Red Hills of Dundee. Driving on the road was like flying an airplane through a cloud. The Evenstads, owners of a successful pharmaceutical firm in Minnesota, couldn't see the cars beside them, much less the contours of the land. They didn't realize that the recently logged hillsides had been left with unsightly stumps, rocks and branches, nor could they see the privileged position the property enjoyed atop the Red Hills, up a slope from Domaine Drouhin.

"The agent told us, 'Too bad it's so foggy, there's a terrific view,'?" Grace recalls. "But we just thought, 'Oh, they always say that.'?" The couple agreed to purchase the land basically sight unseen, providing that a soil sample showed that Pinot Noir could thrive there. It did.

Now they sit on the screened-in porch of their 15,000-square-foot Tuscan-style house surrounded by vineyards. From the same hilltop on this clear summer morning, the majesty of Mount Hood and Mount Adams are visible. It's a special location, befitting a true Oregon grand cru. Since 1998, Domaine Serene, named for the couple's daughter, has produced more than two dozen wines scoring 90 points or higher on Wine Spectator's 100-point scale, fewer than only Ken Wright and Argyle. Its single-vineyard wines sell for $75 a bottle, the price of quality Burgundy.

Beyond that, by a combination of ambition, dedication and investment, the Evenstads have helped lift the image of the Oregon wine industry. "They raised the bar on what could be done in Oregon, on what people were willing to do," says enologist Lynn Penner-Ash, who formerly ran Rex Hill Vineyards and now makes wine at her own Penner-Ash Wine Cellars.

More than any specific innovation, the Evenstads brought an accumulation of what businessmen call best practices to bear on an industry trying to find its footing. With few concerns about costs, they were able to selectively cut fruit from their vines, reducing yields to a 16-year average of 1.7 tons per acre. They invested in French oak, built a gravity-flow winery and installed up-to-date equipment.

From the beginning, they utilized a sorting table to retain only the ripest, healthiest grapes, all before Oregon could offer financial return on such severe selection. These days, their grapes are fermented in varying combinations of 220 tanks and tubs of four different sizes, providing great flexibility. Cuvées age undisturbed, without fining or racking. "They came here to make absolutely the best wine they could," says Scott Wright, owner and winemaker of Scott Paul Wines, "and they never compromised. Not in the vineyard, not in the winemaking, not in how they positioned their wine."

The positioning may be the most noticeable tactic. By building a showcase facility in a dramatic location, pushing pricing barriers and placing their top cuvées in restaurants such as the French Laundry, Charlie Trotter's and Daniel, they let the world know that Oregon's wines are worthy of serious consideration. "Image does matter," says Ken Wright, who made Domaine Serene's wines from 1990 through 1998. "The money spent on a quality image helps everybody. It says to the rest of the world that things are healthy, and there's an approach to quality in the industry. It helps get that word out."

Lately, the Evenstads have been shouting this message a little louder. Recent advertisements tout a 2004 tasting in which Domaine Serene claims that its wines topped bottlings from Burgundy's revered Domaine de la Romanée-Conti. And, starting in November, 150 cases of rarified Pinot Noir from the 2002 vintage began to be released to customers who placed orders months before. Called "Monogram," the wine is a blend of one barrel from each of the winery's three estates.

"[My husband] loves to barrel taste, and he gets excited when he finds something really extraordinary," Grace explains. From there, winemaker Tony Rynders whittles further, selecting enough wine for just 900 bottles. Such intense selection doesn't come cheap. At $200 a bottle, Monogram is by far the most expensive wine ever produced in Oregon.

On Father's Day 1970, Grace gave her husband a Swiss publication called The Great Book of Wine. It included 16 pages devoted to Africa and a single paragraph on Oregon. Wine was then a novel pleasure for the couple; Grace had tasted her first glass just two years before. They swooned over Burgundy, but found little time to enjoy it. They had a baby son and a young daughter, and Ken was busy rebuilding a failing pharmaceutical firm they'd purchased from Grace's relatives. Still, the gift carried the hope of a different life in the future. Grace inscribed the book: "Maybe this is the first step toward having our own winery."

The Evenstads spent the '70s and '80s amassing a 1,000-bottle collection, nearly all French. "We couldn't understand why nobody could make a good domestic Pinot Noir," Grace says. The fantasy of doing it themselves lingered, but Ken was occupied with developing pharmaceutical products and running the now-profitable Upsher-Smith Laboratories, which had been founded by Grace's grandfather in 1919.

Then the couple visited friends in Texas in November 1989, and drank a bottle of Oregon Pinot Noir. The quality of its fruit startled them. On the flight home, they agreed that the time had come. Their children had reached adulthood, and Upsher-Smith's success would be able to provide them with the investment capital. "Let's go to Oregon," Ken said.

A month later, they bought the Red Hills property and cleared it, though they couldn't plant vineyards until 1993 because of a phylloxera infestation. They needed someone to source grapes and make their wine, and a contact suggested Panther Creek's Ken Wright. The Evenstads wanted only 1,000 cases a year, which sounded manageable to Wright. And they had a vision. "They said, 'Let us know what you need, and we'll do it,'" Wright relates. He signed on.

The Evenstads set their sights on consistency. The blended Evenstad Reserve would be the soul of Domaine Serene and the centerpiece of its production. A multilayered wine with notes of violets and vanilla, it typically shows the complexity of a range of terroirs, as framed by soft tannins and a regimen of new oak. They wouldn't make a single-vineyard wine for years, but when they did—from the Mark Bradford Vineyard (named for their son), in 1996— they still preferred the blend. "All the vineyard sites here have one purpose, one highest calling," says Rynders, who replaced Wright in late 1998, "and that is to make the Evenstad Reserve."