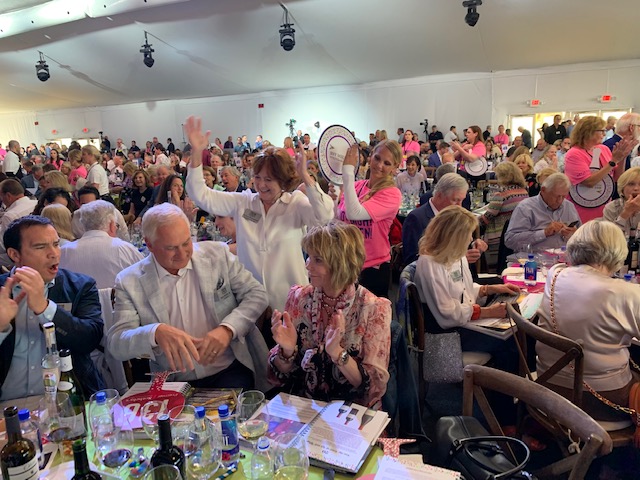 This past weekend at the star-studded Naples Winter Wine Festival (NWWF), Grace & Ken Evenstad, Founders and Owners of Domaine Serene Winery in Oregon and Château de la Crée in Burgundy, raised $180,000 for at-need children in the community. The Festival is celebrating its 20th anniversary and raised more than $20 million dollars in total- a new record for the Festival.

“We find the charitable enthusiasm of the Festival amazing and extremely contagious. The weekend is full of exciting dinners, wines and, when the last of the confetti drops to the floor, we are raising money for underprivileged and at-risk children in the community,” stated Grace Evenstad, Co-Founder and Owner of Domaine Serene. “It’s a can’t miss event and we have been dedicated to the cause since day-one.”

The Evenstads donated one of the most anticipated auction lots of the day. Titled There’s Wine in Them Hills, it was centered around 48 bottles of Domaine Serene Pinot Noir to be selected for a rare bottling from the barrel of the winners’ choice.

The winning bidders, Dr. Rob and Julie Heidt of Cincinnati, expressed that they were beyond excited to be able to personally taste and select their exclusive Domaine Serene wines for their cellar when they visit the winery later this year. Joining the Heidts at Domaine Serene will be Master Sommelier, Ken Frederickson to help them to make their wine selection from an array of Pinot Noir barrels. When bottled, this ultra-rare limited offering will be the highest valued American Pinot Noir ever purchased at auction, at $3,750 per 750ml bottle!

Grace and Ken Evenstad are fixtures at the Naples Winter Wine Festival and Grace has attended every auction for the past twenty years, serving as a past Festival Chair and now as a Lifetime Trustee. Their combined donations over their 20-years of involvement eclipse the $4 million dollar mark for the cause. Their contributions have helped the NWWF raise over $200 million over its two decades.

Their personal generosity is not central to this one event, or this single cause. The Evenstads also play a very important role in the local Oregon charitable wine scene.

Every November, they donate their award-winning facility, the Clubhouse at Domaine Serene, plus a trip to their Burgundian home, Château de la Crée, or their Oregon estates in addition to five cases of a special, limited-production, blend of Domaine Serene ¡Salud! Cuvée Pinot Noir. Their contributions have raised tens of thousands of dollars for the ¡Salud! Organization - which provides healthcare to vineyard workers throughout Oregon.

Further, in September of 2018, the Evenstads pledged $500,000, in hopes of raising a total of $1,000,000 through matching industry donations, to launch an initiative taking aim at eradicating the Grapevine Red Blotch Virus - a clear and significant threat to vineyard properties and winemaking in the Willamette Valley and beyond.

That sizeable donation and initiative comes on the heels of the largest gift in support of wine studies in Oregon history - $6 million dollars in total - to endow the Evenstad Center for Wine Education and the Evenstad Chair in Wine Studies at Linfield College. The record-breaking donation created the first institution in the country to offer an interdisciplinary liberal arts degree and master’s degree in wine studies.

Charitable giving is an essential part of the fabric that makes up the culture at Domaine Serene, Château de la Crée and the legacy of Grace and Ken Evenstad. The Evenstads and the Evenstad Estates brands have now donated or raised nearly $20 million for philanthropic causes.