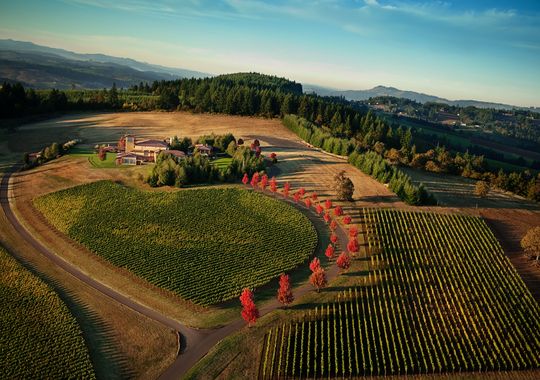 In a first for Oregon, the owners of Domaine Serene in Dayton, Grace and Ken Evenstad, have purchased a vineyard and winery in Burgundy, France, turning the tables on a trend that has seen an increasing number of French wineries purchasing vineyards in Oregon.

The Evenstads have purchased Château de la Crée in the Côte d'Or area in Burgundy.

"Owning and farming legendary vineyards in Burgundy is a dream come true for us," Ken Evenstad said in a press release. "We have a once-in-a-lifetime opportunity to make our own wines from famous vineyards like Morgeot in Chassagne-Montrachet, Clos des Angles in Volnay, and La Garenne in Puligny-Montrachet where world class wines have been made for centuries."

The purchase has been in the works for about three months. Because the winery is a privately held company, details of the purchase were not disclosed.

"We've been looking for a great château for about six months," Harris said. "The property had just been listed and we had someone working for us and we immediately went to look at the property."

The Château de la Crée estate includes a unique collection of preeminent vineyard sites, a state-of the art, gravity-flow winery and a historic restored château in the village of Santenay. Dating back to the 15th century, the Château was originally owned by Nicolas Rolin, Chancellor of the Duke of Burgundy Philippe le Bon, and founder of the renowned Hospice de Beaune.

"About half of the vineyards are premier cru designated, which means that they are top quality," Harris said.

Plans are to keep the Château de la Crée name.

"It's a historical name so it's really important that we keep it," Harris said. "We may create another brand, which would be the top quality wines, under the Maison Evanstad name most likely."

The same team at Château de la Crée will stay on, but Harris will be managing that winery from Domaine Serene, as president of both.

Aline Beauné, the winemaker at Château de la Crée, will work collaboratively with Erik Kramer, the winemaker at Domaine Serene. Longtime viticulturist Nicolas Perrault will continue to look after all the vines and estates.

Domaine Serene plans to introduce Château de la Crée's wines to new markets, and to expand in other markets such as the United States, and former owner Nicolas Ryhiner is helping through the transition, Harris said.

The purchase represents another step up in the perception of Oregon as a premier wine-producing region.

"I think that the purchase by Domaine Serene is another indication that Oregon is a world-class wine region," Michelle Kaufmann, communications manager for the Oregon Wine Board said.

"Our owners and our winemakers are going into established wine regions and are being taken seriously by people who have been making wines for centuries. Domaine Serene is a great example of a world class winery with their dedication to producing to the finest wines possible in Oregon. I know that they're going to do the same in Burgundy," Kaufmann said.

"We think it's great and really shows the long-time synergy between Oregon and Burgundy," said Alison Sokol Blosser, co-president and CEO of Sokol Blosser Vineyards, also in Dayton.

"I think it's great for Burgundy and Oregon; it's a juxtaposition," said Rajat Parr, co-owner of Evening Land Vineyards in Dundee, which had produced wine in Burgundy up until the 2011 vintage under a negociant model, making wine from grapes purchased from other vineyards.

"People from Burgundy have invested in Oregon," Parr said. "Now you have people in Oregon investing in Burgundy. It's almost a reversal in role."