The 25th anniversary of Domaine Serene’s first vintage debuts an elevated blend of top vineyards in the Dundee Hills. 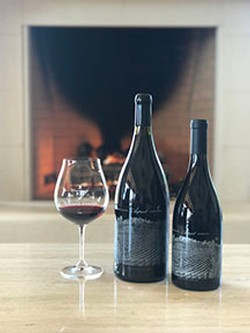 In a busy year for Domaine Serene, the Evenstads are making news again as they, along with their award-winning winemaking team, have crafted a truly remarkable new release to celebrate their 25th vintage.  The Aspect Pinot Noir is an extremely rare blend created to showcase the complimentary styles of the Evenstad Estate’s East, South and West exposures.

“When we first came to Oregon and purchased the Evenstad Estate, we knew that we had found a very special place.   Now, almost thirty years later, the Evenstad Estate is one of the finest groupings of vineyards in the world for producing distinct and different styles of Pinot Noir and Chardonnay.  This is the first time that we have brought those elements together for a blend specifically from our three favorite vineyards," says Owner and Co-Founder Grace Evenstad.  “This release truly celebrates the special and unique aspects of our vineyard properties combined with the finest vineyard management, top winemaking and blending techniques, and meticulous barrel selections.  The Aspect is a magnificently complex and opulent wine that takes the best of what each individual parcel has to offer and elevates the components to an even higher level of beauty and quality.”

If, as they say, a wine is only as good as the sum of its parts – the Aspect blend is destined to be one of the most sought after wines from the New World.

The 2014 bottling was crafted by sourcing the finest, hand-selected barrels from three of the most exceptional vineyards from the Evenstad Estate – Grace, Mark Bradford and Côte Sud.  These three outstanding vineyards, located in the celebrated Jory Soils of the Dundee Hills, produce distinctly exquisite single vineyard wines that are praised by critics and coveted by collectors year over year. 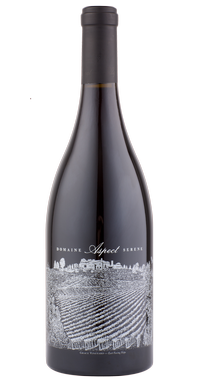 This first-ever, blend of these three premium sites was meticulously crafted by their experienced winemaking team using the same artistry that has been utilized by Domaine Serene for the past 25 years.  That same mastery has consistently earned the Evenstads recognition as unrivaled iconic producers of Pinot Noir the world over.

A serious wine for the serious collector, the wraparound and etched label was uniquely designed to replicate an Eagle soaring above the Evenstad Estate – one of the world’s most celebrated terroirs for growing and producing transcendent Pinot Noir.  The bottling is a showpiece and frames the outstanding wine within.  It is the perfect addition to the finest cellars of the world.

This release comes on the heels of another busy summer for accolades and praise as Decanter Magazine, for the second year in a row, recognized Domaine Serene as one of the world’s top wine producers – awarding them the prestigious prize of Platinum “Best in Show” at the 2016 Decanter World Wine Awards.  Further, they are not the only publication to award the winery with top honors in recent years.  Just this past November, Domaine Serene received recognition from the Wine Spectator as the top white wine of the year for their 2014 Evenstad Reserve Chardonnay and again in 2013, when their 2010 Evenstad Reserve Pinot Noir was awarded the top-ranked Pinot Noir in the World. Additionally, renowned wine critic James Suckling has included Domaine Serene Winery in his prestigious list of Great Wines of the World for the past three years, an honor shared by only two other wineries in North America. Finally, wine critic Anthony Dias Blue has described Domaine Serene as “The Château Lafite of Oregon”; and Robert Parker, Jr. of the Wine Advocate has designated Domaine Serene as one of only two wineries in the state that merit an “Outstanding” rating.

Grace and Ken Evenstad founded Domaine Serene in the Dundee Hills of Oregon in 1989. The Evenstads had faith and confidence in Oregon early on, before there was a national market for Pinot Noir and Chardonnay from the region.  Today, Domaine Serene produces wines from six individual vineyard estates, planted exclusively to Pinot Noir and Chardonnay.  Each estate offers a diversity of soils, clones, rootstocks, microclimates, slopes and elevations that add distinguishing complexity and elegance to the wines.  In 2001, the Evenstads completed construction of their current state-of-the art, five-level, gravity flow Pinot Noir winery.  They broke ground in 2017 for their Chardonnay and Sparkling winery, the first dedicated white winery of its kind in Oregon, and will debut their new Sparkling Wine program that is scheduled for release in the summer of 2018.  The wineries, located on the prestigious Winery Hill Estate, were built as a statement to the quality of Pinot Noir and Chardonnay that can be produced from the world-class Dundee Hills AVA.  In 2015, Ken and Grace acquired Château de la Crée, the respected wine estate located in the birthplace of Pinot Noir and Chardonnay, the renowned Côte d'Or.  This made them the first Oregon-based vintners to own land and produce wines in Burgundy, France.  In total, the Evenstads own 730 total acres of land in the hills of Yamhill County, with 275 acres planted to vine, and 25 acres, comprised of over forty percent Premier Cru vineyards, in the Côte de Beaune region of Burgundy.  Finally, in 2017 Domaine Serene opened a new best-in-class hospitality center, the Clubhouse at Domaine Serene, that is changing the landscape of fine wine hospitality in the Pacific Northwest.  For the past 25 years, Domaine Serene, under the guidance of the Evenstads, has been focused on excellence in a never-ending quest to produce world-class Pinot Noir and Chardonnay.  Their mission is to produce outstanding quality through continuous improvement and a commitment to extremely high internal standards.  Domaine Serene’s wines represent the achievement that is possible in Oregon, one of the finest regions in the world for Pinot Noir and Chardonnay.